These past few weeks seem to have held a lot of major life events for people I know.

I had a friend from grade school get married last week. They went somewhere tropical for their honeymoon – I am extremely jealous.

A classmate from grade school had a baby girl yesterday. Wow. We shouldn’t be old enough to reproduce yet, right?

A girl I went to high school with got engaged this past week. Seeing the pictures reminds me of when Trevor and I first got engaged. Although, we still haven’t seen all of those pictures  yet…

One of my roommates also got engaged recently and told us before the “official” Facebook post. I warned her of the soon to be most asked question of her month – “Do you have a date set yet?” She told me she’d already heard it from every family member she had enlightened about the big news.

It’s crazy that all of this stuff happened so close together. When did we become old enough to have so many life changing events happen to us? I feel like we should all still be sitting in 4th grade, taking a spelling test… Life is going by so quickly lately. I can’t decide if I like it or not.

Today I worked on cleaning out some of the drawers in my desk at home. When we moved to Green Bay, they were basically where I threw all of my memorabilia from vacations and from my life in Minnesota. However, after the wedding in August, I am moving to Saint Paul and I don’t plan to leave too much behind at my parents’ house when I do so.  So the process of cleaning my room has begun!

The motivation for working on the desk drawers came from my inability to move my desk from where it was located in my room. Yes, there was that much crap in there.

I came across a black notebook. I figured it was a journal of sorts, however I opened it and there were a few traced pictures (I suck at drawing-that’s how I know they are traced and not free hand). I looked further in the notebook and came across a story I had written..

While I was younger, I really aspired to become a writer. I was always writing random little stories in notebooks. A lot of them I have come across and had some good laughs reading.

This one I didn’t remember though.

It was about a character named “Emilee Holland”. I obviously really sucked at coming up with character names and used my own name for inspiration. I read through the story and quickly realized that I was writing about my experience moving from Vernon Center MN to La Crescent MN. As I read, all of the moments written about were clearly brought to the front of my memory.

I guess writing has been my stress outlet for a while now. (I am guessing that this story dates back to about fifth or sixth grade, based on my penmanship similarities to notes I also found). Writing these stories were how I coped with my move. Now, I write on here and that’s how I handle stress (except right now I’m not stressed-I’m just bored).

It’s kind of cool looking back over these old stories and notes and viewing my life back then. It is crazy to see everything that has happened since then. Now, all I have to do is look back through old blogposts.

Grade school and high school were really rough times in my life.

After third grade I went from the public school in my town to a Lutheran school in a town thirty minutes away. I had been bullied in my two and a half years at the public school I had attended, and my parents thought it was time for a change. At this point I had already moved several times due to my dad’s job.  I was not a huge fan of change.

I don’t remember much about my thoughts about this transition, but I know that first year there was rough. I did not have any friends from my memories and remember the girls in my class passing notes about me and I would find them in the trash.

I grew into a rough state of mind do to this. I ended up developing good friends, though. I remember constantly comparing myself to them quite frequently. I could not figure out why they had all been so mean to me at first. I thought of every possible reason I might not fit in: I was skinnier than some of them, I was smarter than some of them, I was worse at sports than most of them, my mom was a teacher, and other irrational things. Just as I was beginning to stray from these thoughts, I found out we’d be moving from Minnesota to Wisconsin that summer.

Little did I know, these thoughts would creep back into my life.

As I moved to Wisconsin, I started at a basketball camp at the high school I would be attending in the fall. I went into the camp with confidence because my favorite sport in grade school was basketball. However, I was not anywhere near the level of skill that many of the girls at the camp were at. This thought of not being good in comparison to those other girls was incredibly frustrating to me. I very quickly sunk into the habit of self-harm due to comparisons I formed against my classmates.

All through high school I struggled with forming comparisons against my teammates, classmates, and people I considered to be my role models. I honestly thought I could not succeed in anything I tried. The pattern of self-harm stayed on throughout my high school experience. While it was not always constant, it would pop up when dismal things happened.

As I have been in college, I have occasionally struggled with these negative thoughts appearing. Thankfully, I have become more aware of my support system and taken advantage of the willing support they have offered.

I am so thankful for those who have been there for me all along. Even when I did not want to acknowledge my parents and sister for their support, I have found they have become some of my greatest support. I am also so thankful for the man that has become a huge part of my life, Trevor. He has helped me out of some tough times that have popped up in college. I am also grateful for the few, strong friends that have stuck with me from high school. Even more importantly, I am so thankful to have a wonderful and loving Savior to forgive me for all of the awful thoughts and actions I did to myself. 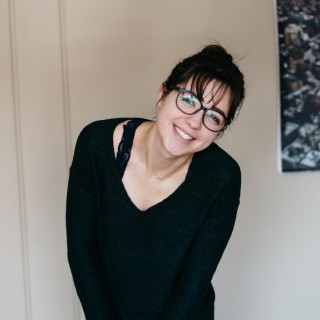 Hello! I am a recent ECE-grad. I am from Green Bay, WI (kind of) and visit whenever I get the chance. I moved around quite a bit while growing up, so I have not always been a Packers fan - but you wouldn’t guess that now! I am married to an awesome, God-loving, and wonderful man: Trevor. We got married in August 2015 and moved our lives to Saint Paul to finish our schooling. He graduated in May from McNally Smith College of Music. I graduated in December from Concordia University. Trevor got me started in photography, which I have grown to love. In addition to photography, I also love to read, worship my Savior, embroider, traveling, drink chai lattes, and hang out with my friends.